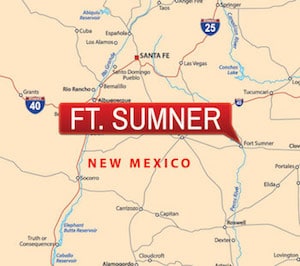 If you were ticketed in Ft. Sumner or De Baca County New Mexico and have questions, Call 505.877.8787 now. We are ready to help answer your questions with a free, confidential consultation. Glenn Smith Valdez is New Mexico’s top traffic ticket lawyer. He has the experience and expertise you want when you hire an attorney to fight your New Mexico citation.

Travelers passing through New Mexico on US Route 60 or US 84 will generally pass though Ft. Summer, New Mexico – the county seat for De Baca county. Those drivers unfortunate enough to be ticketed in De Baca County or in the Village of Ft. Sumner, will be ordered to appear in either De Baca County Magistrate Court or the Ft. Sumner Municipal Court.

De Baca County is a very rural location, served by two main highways, US 60 and US 84.The two highways are the main source of traffic activity and traffic citations in the area, and they converge in Ft. Sumner, the County seat. Most of the traffic violations come from these two highways, with speeding tickets being the most common infraction. However, careless driving no insurance, reckless driving and suspended driver’s license charges are also common in Ft. Sumner and De Baca County. If you have been ticketed on US 60 or US 84 in New Mexico, call 505.877.8787. Another common De Baca County violation is a school zone on the main highway as it passes through Ft. Sumner. State police, Sheriff’s deputies and Ft. Sumner PD all enforce the school zone which generates many traffic tickets, mostly from drivers passing through and occasionally even professional truck drivers unfamiliar with the area. Whatever the citation, if you need help dealing with a Ft. Sumner or De Baca County ticket, call Glenn Smith Valdez today.

Most of the drivers ticketed in De Baca County or Ft. Sumner are out of state drivers. With De Baca county being so remote, hours away from Albuquerque, Santa Fe and even Amarillo, it is often very expensive and always very time consuming to travel to Ft. Sumner for traffic court. Mr. Valdez and his team have represented out of state drivers in the Ft. Sumner traffic courts for years, and are very familiar and experienced with the options and procedures for avoiding in person appearances for their clients. For out of state drivers, he can arrange either to handle the entire case for you, keeping you updated by phone and email, or if you prefer, arrange an appearance by phone. With telephonic appearances, the two of you can appear by phone and Mr. Valdez will conduct a trial, resolve your ticket, or even request dismissal without you having to personally travel to Ft. Sumner. The first step in the process is an appearance on the date the citation orders your appearance. New Mexico law allows an attorney to make an appearance for you, and Mr. Valdez will do so as soon as he is retained. After making the initial appearance, he will file all the appropriate motions for your traffic case. Motions for telephonic appearance, waivers of appearance, demands for discovery and motions to dismiss are a few of the more common motions. Whatever your situation, when you are ordered to appear in Ft. Sumner for traffic court and cannot make it to court for any reason, call Glenn Smith Valdez.

We can Help You Waive Your Appearance

If you retain us to represent you and waive your appearance, Mr. Valdez will appear on your behalf for all scheduled hearings. He will negotiate with the officer that issued your traffic citation, and is often able to get citations dismissed before trial. Sometimes, he can convince the officer to agree to have you attend driver’s school, make a donation to the local crime stoppers program rather than pay a fine or get the officer to agree to a deferred sentence. With a deferred sentence, you will pay about $86 in court costs, but if you receive no more tickets during the deferment, (usually 30, 60, or 90 days) the citation is dismissed and no conviction will appear on your driving record. When you hire Mr. Valdez to represent you and choose to waive your appearance Mr. Valdez will not only appear for you , he will keep you informed, letting you now about negotiations and progress. He will always work to achieve your objectives, keeping convictions off your driving record, protecting you from increased insurance rates and relieving you of the stress and hassle of worrying about your Ft. Sumner traffic case.

We can Arrange for You to Appear by Phone.

Many drivers cited in De Baca County – Ft. Sumner are from out of state or parts of New Mexico that make a return to Ft. Sumner costly and inconvenient. Those drivers may want to appear for their Ft. Sumner Court date by phone. Mr. Valdez and his team are experienced in setting up phone appearances. They will file the appropriate motion to request a telephonic appearance. Mr. Valdez will also appear with you by phone and if necessary, conduct your Ft. Sumner traffic court trial by phone. He will prepare the case, represent you and cross examine the officer for you. If the officer doesn’t appear for trial, he will request or motion the court for a dismissal. He is an expert in New Mexico traffic law and will do everything possible to get you the best possible outcome in your Ft. Sumner traffic trial.

You can hire a great lawyer to represent you in your De Baca County Magistrate Court or Ft. Sumner Municipal Court case. Regardless of the charge – Speeding, no seatbelt, no insurance or other minor New Mexico traffic violations – even more serious New Mexico violations like careless or reckless driving – with the right lawyer you can win. Glenn Smith Valdez has the experience, expertise and passion you want when you hire an attorney to represent you in your Ft. Sumner or De Baca County traffic matters. Don’t let your Ft. Sumner or De Baca County citation turn into a headache, call today and put an expert New Mexico Traffic ticket attorney to work on your De Baca County court case. If you have a traffic ticket, traffic warrant or driver’s license suspension in Ft. Sumner Magistrate or Municipal Court Mr. Valdez and his team have the experience and insight needed to resolve your traffic matters quickly and without ever returning to Ft. Sumner for court.

Services
★★★★★
I highly recommend Mr. Valdez, I am from Texas, and I was on my way to work, unfortunately I got two traffic citations in Mew Mexico. I was looking for help to fight an out of state citation and in doing so, I came across Mr. Valdez law firm's website. I read his clients testimonials and recommendations which are high, so I called his office for help with my citations, and I had my citations dismissed. Mr. Valdez and his staff are very courteous and professional and exceeded my expectations. I can't thank you enough Mr. Valdez, I give you five stars across the board!! Thank You! Thank You! Thank You! Sincerely R. Salas Romaldo Salas
★★★★★
Mr. Smith Valdez was perfect. We had a difficult case and he made sure to push for us to be heard. I was impressed. The whole thing was stressful but Mr.Smith Valdez and his staff were understanding, responsive and helpful. Totally recommend Glen Smith Valdez. Lila Pacheco
★★★★★
Received a speeding ticket in Gallup NM where the limit changed from 75 to 65. Must of missed the sign because I was passing a slower truck blocking my view of the sign at that time. Saw a billboard advertisement for Valdez Law Offices so I thought I would give them a call. Best call I could of made for the situation. These people were Great and stayed on top of it and kept me in the loop through the whole process. Ticket was dismissed. Thanks again Valdez for the excellent work!!! Bruce
★★★★★
After doing some google research and considering several factors I decided to go with the Valdez Law Firm!! Let me tell you this was the BEST decision I made! From the beginning to the end of the process this team was very professional and clear, made feel very confident and as such, in good hands. The outcome was amazing. I encourage everyone out there in need of an extraordinary traffic law office to call these guys!! Thank you thank you and thank you. Will always be grateful to have been your client and for all the hard work you all did. You guys rock!! Vladimir V.
★★★★★
Excellent customer service!! The whole staff was very attentive and always kept me updated at all times!! Thank you so much Mr Valdez and staff for working hard and getting my case dismissed. Gabriel Quesada
Submit a Law Firm Client Review